The European Youth Parliament is a unique programme which inspires and empowers young people to become open-minded, tolerant and active citizens. Each year EYP organises regional and national events where participants discuss current topics in a parliamentary setting.

During the competition there were six debates ranging from the Carmel led debate on Gibraltar to the ethics of the fashion industry.

Head of Politics, Mike McLoughlin said “I think EYP is a fantastic event for students to learn about the complexities of European and international politics in a non-partisan environment. It’s a great experience and it’s fun too!”

The victorious students found the debate extremely inspiring and rewarding. Captain, Eva Carroll commented “My team mates were phenomenal, they debated on EU issues with sophistication and passion.” Vice Captain, Joe Maloney added “The debates were an outstanding display of political ideas and discussion with fantastic contribution from all participating teams. I’d like to commend the teamwork from the Carmel students and thank them for their winning performance.”

The two winning teams from Merseyside will go forward to compete in the national finals at Liverpool Hope University in June. Good luck and congratulations again on such a fantastic achievement!

Click here to find out more about studying Politics at Carmel. 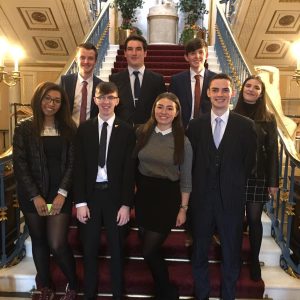 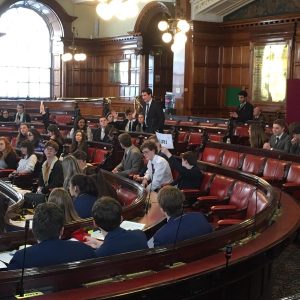