Sixteen students from the Law Department have taken part in the Regional Heats of the National Bar Mock Trial Competition.

Carmel has competed at this event, based at Manchester Crown Court, for the last 10 years. Several judges who usually precede over important criminal trials gave up their Saturday to take part. Many of our students are in Lower 6th and were doing this for the first time. This year we managed for the second time to get into the final against Wilmslow High School.

A special mention goes to Sophie Blinston, who stepped in at the last moment to take the part of a witness in addition to playing a Barrister in another trial. Also at the end of the second trial of the day, the Judge commented on the quality of Elizabeth Mimnagh’s closing speech. He said it was the best speech he had heard from a student in this competition.

Unfortunately Team Carmel didn’t win this year but it has made the department more determined to go one step further next time. Well done to everyone who took part.

To find out more about studying A Level Law at Carmel click here. 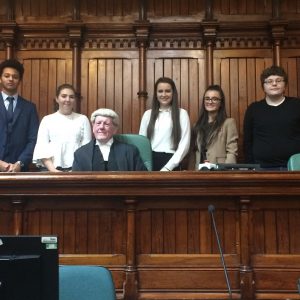