Aaron, aged 16, commutes from Liverpool where he lives with his family. He said “I heard my Mam shout my name. You know when someone shouts your name and it frightens you? I ran downstairs and there’s my Dad on the couch, blacked out, blue lips, blue ear lobes, his fingers – everything. I thought: ‘Right, that’s CPR time’.”

Aaron noticed that his Dad wasn’t breathing and immediately rang 999 asking for an ambulance. He told the BBC, in an interview, “I’d had some informal training at the Scouts and an NHS day in Liverpool with school a couple of years before. But I didn’t know I could do it. I’d never practised. It was like an emotionless experience.”

We can’t imagine how hard it must have been for Aaron and his family to have experienced something so traumatic. Aaron told us “after four minutes of doing chest compressions, the ambulance actually arrived. They got the defibrillator out. After about four blasts on that we got a heartbeat.”

Aaron’s Dad, David, who had suffered a cardiac arrest explained “I woke up in hospital. I had complete memory loss for a week. I felt very proud of Aaron really. In some respects I felt very emotionally traumatised.” To help his Dad with his memory recovery, Aaron wrote the following letter to explain what had happened: 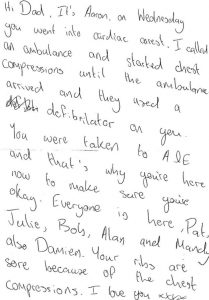 We are extremely proud of Aaron’s bravery and ability to perform under pressure. Aaron’s Dad, David, had this to say about his son’s actions; “I have a very special relationship with Aaron that’s unique. I had no idea he had those CPR skills. Had he not had those skills, I wouldn’t still be here.”

Aaron’s story is inspirational. We wish him huge congratulations on winning the award and send our best wishes to his Dad and the rest of his family!
#inspirational #lifesaving #cpr


For more information on CPR please visit the BHF website 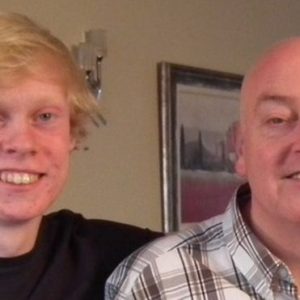