Congratulations to Lower Sixth student, Anjelu Pullan, who has recently won the ‘HEART of Liverpool’ competition.

Anjelu was encouraged to enter the competition by her teacher from Maricourt Catholic High School, before joining Carmel in September. Her teacher was aware that Anjelu had already won previous art awards and thought it would be a good project for her to focus on during lockdown.

Liverpool Heartbeat is an organisation that was created to inspire young people in the North West and Merseyside to pursue healthy, exciting and fulfilling lifestyles, which is what we inspire our students to do as part of our 10:10 in Action programme. The brief given for entering the competition was to show what the Heart of Liverpool means to you.

Anjelu’s winning piece of Artwork was based on British Olympic Founder, John Hulley.

She says, “I have known of John Hulley when Liverpool Heartbeat went to my high school, and Tim Quinn gave us magazines about his achievements. I was also invited to see the unveiling of Hulley’s statue in 2019, where I also saw Princess Anne. He was such an important figure in Liverpool, as he advocates for physical education and was the forerunner of the British Olympic Association!”

To receive her competition winner’s award, Anjelu attended a ceremony at The Bluecoat where she was awarded an illustration drawn by Russ Leach, who has been commissioned by Marvel, BBC, Cartoon Network and many more. Russ drew Anjelu as a superhero, edited to look like a comic book cover.

Art is one of Anjelu’s passions and she is currently studying, Fine Art, Biology and Chemistry in her first year at Carmel College.

She says, “Art has been something that I have been passionate about, ever since I was little! My skills have been recognised by my primary, and my high school, as they constantly support me.”

Well done Anjelu! We hope to see more of your fantastic work around college soon! 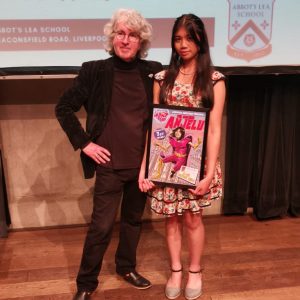 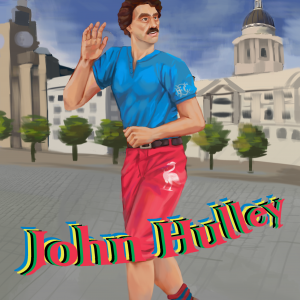 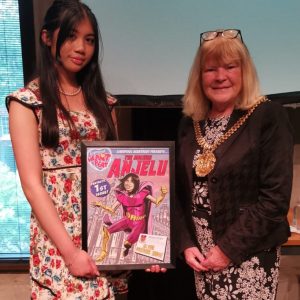