We’re really pleased to share news of former student, James Darwin, who left Carmel in 2016 to join the RAF.

James has been in the RAF now for over 4 years. He was lucky enough to work on Typhoon fighter jets as an Aircraft Maintenance Mechanic early on in his career. James is now a fully qualified Aircraft Technician specialised in mechanical systems.

When we caught up with James he said: “I’m currently 15 months into a 5-year tour on the Royal Air Force Aerobatic Team (The Red Arrows). For the upcoming 2021 display season I will be a member of the Dye Team, which is a coveted position allowing us to follow the aircraft all over the country (and world). Our primary role is to ensure all our jets are filled with dye to allow a great display of red, white and blue smoke for the public.”

When he looked back on his time at Carmel, James commented: “During my two years at Carmel, I was continuously supported and guided in the right direction by staff to achieve my goals. The college understood my passion wasn’t in further education yet continuously provided me with resources, skills and knowledge to go on and join the Royal Air Force as a Mechanical Technician.”

It’s great to hear that James has had such a fantastic career so far. We wish him the very best of luck for the future! 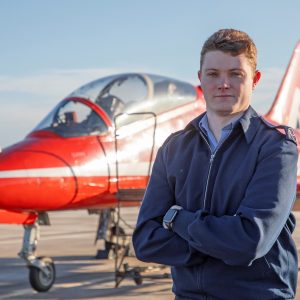