With 11 wins and 1 draw to their name, Team Carmel finished 4 points clear of their nearest rivals Winstanley.

The number of students getting involved this year has been excellent. There’s a good mix of first and second year students from all backgrounds, with different levels of experience. They turn up to represent the college, week in, week out. There’s a brilliant atmosphere, full of team spirit.

At least four players have also been selected to play International Rugby League this year. Cian Williams and Iwan Marsh are currently training with Wales U19s. Warren Paladino and Robert Cooke have been named in the Scotland U19s side.

“I am immensely proud of all the lads that have pulled on a Carmel shirt this season” commented Team Coach, Kieran Lacey. “They have played an exciting brand of rugby, that has been both thrilling and nerve wrecking to watch at times, but always in a manner that typifies the spirt of the game and the college.”

When asked about stand out performances, Kieran said “Choosing just one performance, ether individual or as a team, from this season is too difficult as everybody has contributed in their own way. They have scored a number of breath-taking tries! The best was possibly against St John Rigby College which saw the ball go through about twenty pairs of hands before finally scoring. St John Rigby’s coach said it was like watching the Harlem Globe Trotters!”

“As a team performance I would suggest either the home game against St John Rigby which was played in awful conditions. In this match, we turned around a 6-18 half time deficit to win 38-18! On a par with this performance was also the final game of the season against Salford Red Devils, a side that contained a number of their academy players including two who had featured in Salford’s first team! For Team Carmel to come away 45-34 winners in front of a massive crowd, on the West Park Rugby Club touch line, was a dream to watch.” 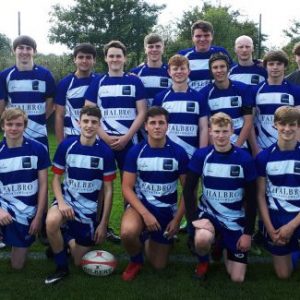