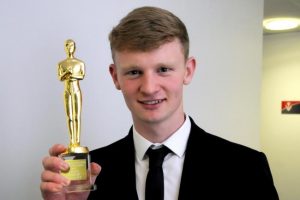 Congratulations to Carmel student Taylor Prescott who received a Special Recognition Award at this year’s Pride of St Helens Awards.

18 year old Taylor, is the eldest son of the late great Steve Prescott. Since his Dad passed away six years ago, Taylor has continued his Dad’s legacy. He has completed several jaw-dropping challenges including climbing to Everest Base Camp in 2016. More recently, this summer, Taylor replicated the challenge his Dad undertook 10 years ago. This involved a gruelling cycling challenge from Perpignan in the south of France to London.

On receiving his award Taylor said “I didn’t expect this at all. Taking on that challenge this year is easily the hardest thing I’ve ever done, harder than Everest. It’s an honour and I hope that my Dad would be proud of what I’ve done.”