It has been great to hear from Alumni student, Amy Shaw, who is currently working as the Script Coordinator on Rocksteady Studios’ new game, ‘Suicide Squad: Kill The Justice League’.

Amy is a member of the company’s Story Team, where she works on the narrative of the game and the recording of characters’ voices. The game is set to release in 2022.

Amy left Carmel in 2014 after completing her A Levels in English Language, English Literature, Graphic Design and General Studies. She went on to graduate from Queen’s University Belfast with a first class degree in English with Creative Writing, before completing a masters in Screenwriting at The University of Manchester. During her time at university, Amy won the GB Undergraduate Scholarship, worked as the designer for The Gown student newspaper and was elected as a course representative.

Since graduating, Amy has worked at ITV, Mammoth Screen, Warner Bros and BBC’s Holby City. She also had a placement with Birds’ Eye View Film, a charity that screens and promotes films written and directed by women. In her free time, she works towards becoming a screenwriter herself, having been recently long listed for KickItDown Productions’ ‘Screen to Screen 2020’ competition, for a short film she wrote.

Amy is always looking to talk to and encourage any young people from Merseyside who don’t know where an English degree can take them. She says, “there are so many jobs in the creative industries that, just a few years ago, I didn’t know even existed. If you had told me in 2014, that by 2020 I would be working to make supervillains funny, I’m not sure I would’ve believed you.”

Reflecting on her time at Carmel, Amy says, “I’m eternally grateful for everything I got out of Carmel, but especially for the amazing teachers. There is nothing more encouraging than to be supported by people who know what you’re capable of, and who will fight to make sure you get it. I often think back to the display wall outside the English Department, of people with English degrees doing weird and wonderful things. It was the first time I realised I might be able to do something unexpected, too.” 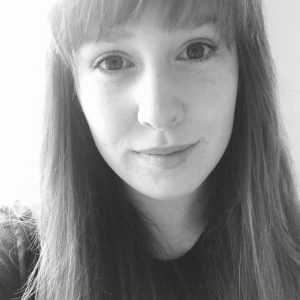